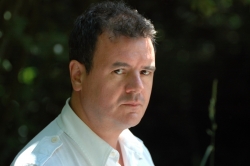 Born in 1967, is an awarded reporter, one of the founders of “Público”, the must prestigious daily newspaper in Portugal. As a scriptwriter, he has been the co-author for Contra-Informação (a Portuguese version, with the original format, of Spitting Images or Les Guignols de L’Info), on air for more than ten years now. He also wrote comedy and drama series and of a full-length film in cinema.