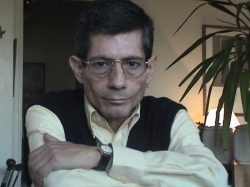 Jorge Marchant Lazcana receives a degree in journalism from the University of Chile in 1974, and is one the most interesting contemporary writes in the present-day Chilean narrative. He has published with much acclaim the novels, “Beatrice Ovalle” (Ediciones Orión, Buenos Aires, 1977, and Editorial Renacimiento, Santiago de Chile, 1980), “The Night that Never Gestated the Day” (1982), “I think we are Unhappy” (Alfaguara, 2002), “The Girl in White” (Alfaguara, 2004), and “Blood like Mine” (Alfaguara, 2006, Editorial Eagles, Barcelona, 2008), winner of the 2007 Altazor Prize. His most recent novel is “The Faceless Lover” published in Chile by Tajamar Editores. For the writing of this book he was supported with a scholarship from the Fondo de Fomento del Libro y la Lectura from Chile’s Ministry of Culture. He is also the author of the volume of short stories “Killing the Lady of the Camellias” (1986). The story which gives the title to the book was included in “My Deep Dark Pain is Love”, an anthology of gay Latin American authors published by Gay Sunshine Press of San Francisco, 1983, included along with authors such as Manuel Puig and Reinaldo Arenas.

In the theater he has presented “Gabriela” (1981), on the life of the poetess Gabriela Mistral, Nobel Prize Winner, “Last Edition” (1983), and “Don’t ask the Moon of Me” (1999), all directed by the most relevant directors of the Chilean scene.

For a number of years he worked as a miniseries author for the Television Nacional de Chile.