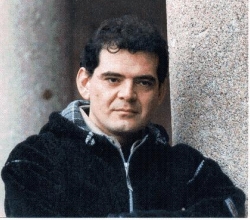 He was born in Salamanca in 1966. In 1998 he published his first novel, Tan alto el silencio (Debate), and his travel fiction El cinturón de cobre appeared in 2001, published by Pre-Textos. His last novel, El paisaje vacío (Debate, 2001), was awarded the Premio de Novela Jaén.