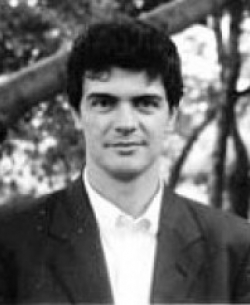 Enrique Serrano (Barrancabermeja, Colombia, 1960) won the Juan Rulfo Radio France Internacional Prize in 1996. His Short Stories La marca de España (Seix Barral, 1997) received praiseworthy words from Gabriel García Márquez (‘He achieves in few pages a great expressive force’) and Alvaro Mutis ("There is so much to comment in this wise and rich route wrote by Serrano of the history of Spain that would make a endless note’). He also wrote another Short Story (De parte de Dios) and the novel Tamerlan (Seix Barral).