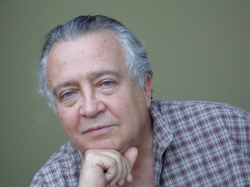 Brazilian author and diplomat Edgard Telles Ribeiro (b. 1944) spent a peripatetic childhood in Marseille and various other European cities. After returning to Brazil, he worked as a journalist, filmmaker, and professor of film studies before entering the foreign service. His debut novel O Craido Mudo (The Night Table), was published in English to critical acclaim as I Would Have Loved Him If I Had Not Killed Him, and was subsequently translated into Dutch, German, and Spanish. Later novels and short story collections have garnered some of the most important literary prizes in Brazil, including the Jabuti Prize (twice), the Brazilian Academy of Letters Prize; and for his latest novel, HIS OWN MAN, the Brazilian PEN Prize (2011). He currently divides his time between New York and Rio de Janeiro.