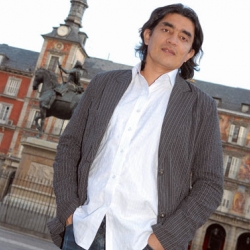 He is the author of essays and novels, but especially television script-writer. He has taken his novels to this medium, with his highly acclaimed Sin tetas no hay paraiso (“Without Teats there is no Paradise”), screened in various countries. He began studying journalism in the Universidad La Sabana, which he never finished. He went into politics, as an activist in the fight against drug trafficking. He collaborates with a number of newspapers inside and out of his country. He has written more than eight books and more than 1680 scripts, including journalistic programs, docudramas, series, novels, documentaries and movie scripts. He has published the books “The Candidate” (1997), “The Cacique and the Queen” (1998), “This is how Elections are stolen in Colombia” (2002), “Without Teats there is no Paradise” (2005), “The Suicidal of Mount Venir” (2007), “Ethic Code for Infidels” (2008), and “The Capo” (2008). In theater he has written and directed “Truths that Kill… of Laughter” (2005) and is the author of “The Penis’ Monologues” (2006).