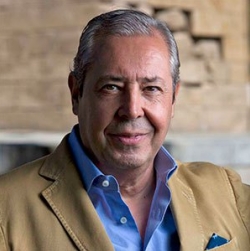 Antonio Cabanas (Spain, 1966)  is the author of the following bestsellers: The Thief of Graves, The Pharo’s Conspiracy, Osiris’ Secrets, The Millenary Dream, The Desert’s Son, The Secret of the Nile, The Path of Gods and The Tears of Isis, with which he has achieved a great critical and public success.

His books have been translated into several languages.

A commercial airline pilot, Cabanas worked as an Iberia captain for thirty-six years, flying to all five continents.

A great humanist and admirer of the culture of Ancient Egypt, of which he is a deeply knowledgeable, he spends a great deal of time investigating and writing about it. He is an Egyptologist and has studied the Egyptian language and hieroglyphic writing, and as of 1990 he is a member of the Spanish Association of Egyptology