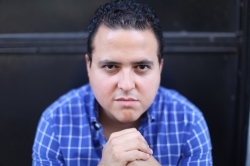 Arnoldo Gálvez Suárez was born in Guatemala City in 1982. He is a writer, journalist and university professor. He has published a book of short stories entitled La Palabra Cementerio (Punto de Lectura, 2013). On La Palabra Cementerio the writer and editor Eduardo Villalobos says, that this is a collection of stories “assembled with the precision of meticulous architecture, in which the narrative resources and the stylistic resonances are intertwined in order to tell us much more than what they say (…) and seem to confirm those words of Ricardo Piglia: ‘The short story is a tale that encloses a secret tale.’ La Palabra Cementerio is a book that definitely enlightens us, but with an oblique and unsettling light.” (Magazine of the Universidad de San Carlos de Guatemala, 2013).

In 2008, he won the XI Mario Monteforte Toledo Prize for Fiction with the novel Los Jueces, the story of a group of neighbors who decide to judge and condemn a criminal.