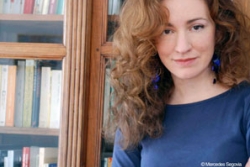 Julia Montejo was born in Pamplona. She studied ballet, piano and singing at the Conservatory Pablo Sarasate, and Journalism at the University of Navarra. She later did a double Master in Screenplay, Production and Film Directing at the University of California - Los Angeles (UCLA), thanks to a grant for the Expansion of Artistic Studies from the Government of Navarra.

She lived for eight years in the United States, working as a screenwriter and director in film and television. In Los Angeles she wrote and directed the film "No Turning Back-Sin Retorno", which garnered more than 20 international awards , including the ALMA award (the Latin version of the Oscar) for best independent American film. Among her work in film, she also has a contract with the American studio Twentieth Century Fox which acquired the script for her screenplay "Heart for Auction".

In 2004 she returned to Spain and since then she has lived in Madrid, combining teaching at the University of Navarra and the University Center Villanueva, attached to the Complutense University with her work as a writer on various TV series. Seven Lives, Personal Reasons, Gavilanes, and Question of Sex or are some of them. In 2014, she worked in the English coordination for the animated series Lucky Fred and has been writing in coproduction for the international Bat Pat, which premiered in 2015.

His first novel, Eva naked (Eva Desnuda), a finalist for the Plaza y Janes-Torrevieja City Award 2005, was published in 2006 by publishing house FASD. Violets for Olivia (Violetas para Olivia) was published in 2011 with Martínez Roca, a part of Planeta Group, and in 2012 with Booket. This novel was translated by Mondadori in Italy in 2012 and there it is in its second edition. She published What I have to tell you (Lo que tengo que contarte) in 2015 with Lumen, part of Random House, which will be published in French in 2017 by Les Escales in France and Canada under the title Une vie à t'écrire . It was also translated into Turkish as well as published in Argentina.

In 2016 she published her fourth novel Dark hugs (Abrazos oscuros).