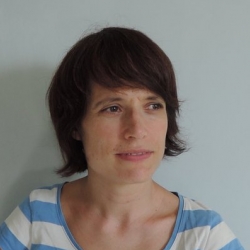 Immediately after graduating in Literature from Queen Mary University of London, she moved to China to teach English at the University of Fudan (Shanghai), with the aim of learning the Asian country's language. She then went on to get a Master's Degree in Chinese Language and Culture at Leiden University (Netherlands), where she studied the forced displacements that took place as a result of the construction of the Yangtze River Dam in southern China.

After intensive dedication into learning Chinese, she worked in Beijing as a journalist and for a local NGO dedicated to HIV prevention. There she had the opportunity to establish contacts and know the situation of disadvantaged groups such as the LGBT, sex workers, immigrants in the city from rural areas and ethnic minorities, as well as to delve into various aspects of the country's social reality and develop a perspective from within the community.

Back in Spain, she worked as an interpreter and mediator for the Chinese immigrant community in Madrid and as a Chinese teacher at the Confucius Institute. In 2015, she returned to China with a grant from the government of Hong Kong to pursue a doctorate focused on the identity and adaptation experiences of second generation Chinese living in Spain.

Her interest in immigrant and displaced communities has been constant during all these years and is the main topic of her brief narrative, published in the magazine "Granta", and of her first novel, Fangfang.