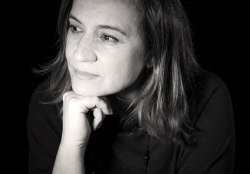 Luisa Castro was born in Foz (Lugo) in 1966 and holds a degree in Hispanic philology from the Universidad Complutense de Madrid. A twenty-one she was awarded the Premio Hiperión de Poesia, for Los Versos del Eunuco (The Eunuch’s Verses), and at twenty-four was the runner-up of the Premio Herralde de Novela for El Somier (The Mattress). Ever since, she has worked as a literary critic and collaborated for newspapers such as the ABC, El País, El Periódico de Catalunya, El Mundo, La Voz de Galicia, and Radiotelevisión de Galicia. She was got a Fulbright scholarship to study film at Columbia and New York University, and on her return from New York she taught movie script a the Institut d’Humanitats de Barcelona, and afterwards has given writing courses at the Universidad de Santiago de Compostela. She has been the director of the Instituto Cervantes of Naples for five years. She presently runs Instituto Cervantes at Bordeaux, and continues to collaborate with the travel supplement of El País: Viajes de El País.

As a narrator, she has received the Premio Biblioteca Breve for her novel La segunda mujer (The Second Woman, Seix-Barral, 2006), and the Premio Torrente Ballester for her short stories book Podría hacerte daño (I could Hurt You, Ediciones del Viento, 2004) and the Premio Azorín for El secreto de la lejía (The Secret of Bleach, Planeta, 2001). Besides that, she has published Viajes con mi padre (Travels with my Father, Planeta, 2003), La fiebre amarilla (Yellow Fever, Anagrama, 1996), and El Somier (The Mattress, Anagrama, 1990)

Part of her journalistic work in Spanish is collected in the volume Diario de los años apresurados (Diary of the Hurried Years, Hiperión, 1998) and in the book Melancolía de sofa (Sofa-like Melancholy, Xerais, 2009), which is a collection of her collaborations in Galician, her mother tongue. For her collaborations in written media she has received the Premio Puro Cora for journalism. And for her entire output she was been awarded the Premio de Vieira de Plata in 2006. The Premio Quaderni Iberoamericani in 2016, and the Cruz de la Orden de Isabel la Católica in 2017, for her work in the dissemination of culture.

She is considered by the critique as one of the most innovative voices of the nineties, and part of her novels and books of poetry are translated into French, Italian, English, German, Dutch and Hebrew.