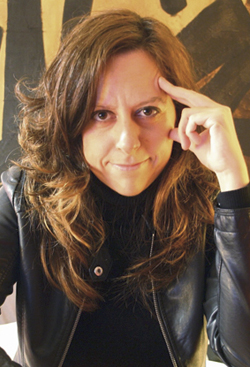 Virginia Gasull begins her professional life in the world of architecture and then directs it towards the development of projects related to the Internet. In parallel, she studies sexology and in 2009 begins her professional work as an instructor, giving sexology talks to groups and associations of women. Her love for wine culture also leads her to different wine-making and tasting courses, as well as visits to wineries in Europe's main wine regions. On a particular visit to the region of Bordeaux, she begins her study "The History of French Vine Growers during the German occupation in World War II".

After years of writing short stories, in 2013 she delves into the research and process of her first novel: "In Vino Veritas", where she combines the culture of wine, the historical period of the Second World War and the world of Art. "In Vino Veritas" was published on Amazon and was highly successful in terms of downloads and reviews, remaining for several weeks at number one of the best-selling list, shortly thereafter receiving the proposal by Suma de Letras to be published under its imprint, which in turn received very good reviews from the specialized press. At the 2015 San Sebastian International Film Festival, she signed an option with the Orreaga Filmak production company for the film adaptation of "In Vino Veritas", which is in the process of pre-production.

She is a member, along with other writers, of the Oskarbi Cultural Association. In 2016, she participated in the book collection of Oskarbi 21 with her short story "1943", a story about the Comet Line network in the clandestine evacuation of fugitives from occupied Europe during World War II.

In March of 2017 she receives a second prize in the prestigious XVI 'Encarna León' Contest, for her story "The River Women". She is currently working on her next novel.