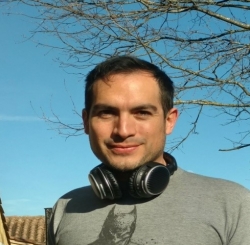 Guillermo Ruiz Plaza was born in La Paz, Bolivia, in 1982. He completed a degree in Hispanic Philology and a Master's degree in Latin American Literature at the University of Toulouse. He is the author of the storybooks "The Fire and the Fable" (2010), "The Last Piece of the Puzzle" (2013), "Summer Shadows" (2016), "Lost Things" (2016) and "Tolstoy's Carnations" (2021). An anthology of his stories has been translated and published in France under the title "Ombres d'été" ("Summer Shades") (2015). He was twice awarded the Santa Cruz de la Sierra National Literature Prize and, in 2016, the Adela Zamudio National Short Story Prize. He is the author of the essay book "Eduardo Mitre and the Scattered Generation" (2013), that studies the poetic and essayistic work of this important Bolivian writer, and he has compiled Vertigos, an anthology of the Bolivian fantasy story (2013). With "Halted Days" he won the XIX National Novel Award, his country’s most prestigious.