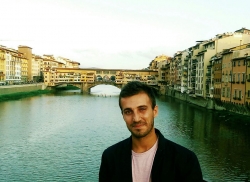 Alejandro Corral is a writer and economist, with a degree in Business Administration and Senior Technician in Cultural Management. He is the managing director of Taller de Historia S. L. and the author of sev-eral articles on economics and economic history. He has collaborated with NGOs in social and cultural de-velopment projects in Central America. As a writer, he lectures and runs workshops on creative writing and has published the thriller New York's Sky (2015) and the historical novel Warrior (2018), with José Luis Corral.

In the year that marks five centuries since Leonardo da Vinci’s death, he offers us a vivid and astonishing portrait of one of the highlights of art history, and establishes himself as one of the great new talents in today’s historical novel genre, capable of fusing an intriguing plot in a deeply truthful and researched context.