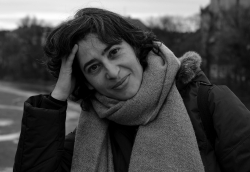 María Reimondez is one of Galicia’s most outstanding and prolific writers and translators. Although her first published book was a poetry collection (Moda galega, Ed. Positivas 2002) and she has published five more collections since (one of them originally written in German), she is best known as a writer of prose for adults and children, and non-fiction books.

She has received some of Galicia’s most important awards for writing such as the San Clemente for O club da calceta (Xerais 2006), the Xerais Award for Dende o conflito (Xerais 2014), the 2014 Author of the Year Award, as well as the Frei Martín Sarmiento for Lía e as zapatillas de deporte (Xerais 2008) and the Agustín Fernández Paz for Fóra do Normal (Xerais 2018).

Reimóndez has lectured and taught writing in different universities and countries, including a stay at the Villa Waldberta in Munich, Hofstra and Colgate University in New York, Warsaw University in Poland, Madras University in Tamil Nadu, to mention a few. She has been translated into other languages and her work has been the subject of a plethora of academic studies. She is known for her unique radical creative universe, her feminist and decolonial approach to writing and her fierce social engagement. Right now, she is involved in the very ambitious project O ciclo dos elementos, a set of novels (7 in total, out of which 5 have been published already) that can be read individually but, if read all together, they reveal a universe of women supporting each other in the face of different obstacles. In the meantime, she also continues writing for children, non-fiction, poetry and theatre.