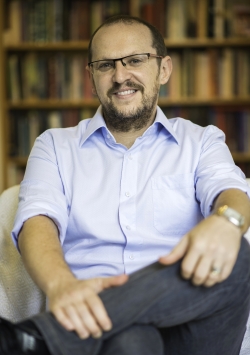 Ilan Brenman is considered one of the most important Brazilian children’s authors. His most famous book, Even Pricesses Fart remained for more than 60 consecutive weeks in the best-sellers list of the main bookshops in Brazil and has been translated into more than 15 languages worldwide. He is also a best-selling author in Spain.

Ilan has a degree in Psicology (PUC - São Paulo), a MA and PhD from the Faculty of Education (University of São Paulo, USP. Since 1997, Ilan has published more than 60 books for children with various Brazilian publishers such as Companhia das Letras and WMF. Many of his books have been considered "highly recommended" by the National Foundation of the Children Book in Brazil. The same institution has awarded his book 14 Pérolas da Índia (Brinque-Book) with the best story-telling book award in 2009, the best picture book award for Telefone sem fio (Cia das Letras) in 2010 and the best children's book for O alvo (Atica) in 2011. Since 2011, Ilan's books have crossed the Brazilian borders and today some of them are published in Europe and Asia. In 2012, O alvo was selected to be part of the German publisher White Ravens' catalogue.