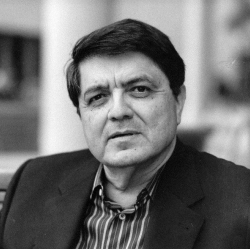 Sergio Ramírez published his first book in 1963; the following year he earned a law degree at the University of Nicaragua. After a lengthy voluntary exile in Costa Rica and Germany —during which he continued to write works of fiction and non-fiction — he became active as the leader of the Group of Twelve, consisting of intellectuals, businessmen and priests united against the Somoza regime. With the triumph of the Sandinista Revolution in 1979, he became part of the Junta of the Government of National Reconstruction, where he was elected vice-president of Nicaragua in 1984, an office he held until 1990. Sergio Ramírez has authored many celebrated novels, as well as collections of stories and essays. He has received Spain's Dashiel Hammet Award, France's Laure Bataillon Award, Cuba's José María Arguedas Latinamerican Award, a Guggenheim Fellowship, the Alfaguara International Novel Award and the José Donoso Prize in 2011. A Chevalier des Arts et des Lettres of France, and a doctor honoris causa of Blaise Pascal University (France), he is also recipient of the International Award for Human Rights awarded by the Bruno Kreisky Foundation, and the Order of Merit of the Federal Government of Germany. He held the Robert Kennedy Professorship in Latin American Studies at Harvard University in 2009. His recent books include Catalina y Catalina (Catalina and Catalina, Alfaguara 2001), Sombras nada mas (Shadows nothing more, Alfaguara 2003), Mil y una muertes (A Thousand Deaths Plus One, Alfaguara 2005), El Reino Animal (Animal Kingdom, Alfaguara 2006), El cielo llora por mí (The Sky weeps for Me, Alfaguara 2008) and La fugitiva (The Fugitive, Alfaguara 2011). His work has been widely translated.