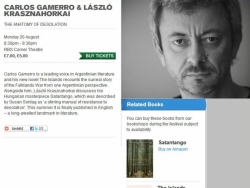 THE ANATOMY OF DESOLATION

Carlos Gamerro is a leading voice in Argentinian literature and his new novel The Islands recounts the surreal story of the Falklands War from one Argentinian perspective. Alongside him, László Krasznahorkai discusses his Hungarian masterpiece Satantango, which was described by Susan Sontag as 'a stirring manual of resistance to desolation'. This summer it is finally published in English – a long-awaited landmark in literature.

‘Gamerro's balls-out novel is a delirious mash-up ... [His] gross, bleakly funny, violence-saturated satire of a psychologically damaged society hung up on impossible myth relies on epic hyperbole, masterfully translated by Ian Barnett. There is enough invention here for four novels, but this multilayered nightmare vision is deftly rendered and devastating in its intensity.’ (Siobhan Murphy, Metro UK).

Image from Siobhan Murphy´s article in the newspaper "Metro"