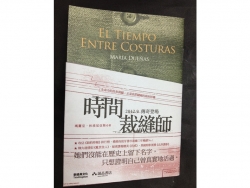 Meanwhile in Spain“Mission Olvido” (the new novel by María Dueñas) has begun to climb the lists as one of the bestsellers, this author has arrived to the Far East with a firm step and she has placed “El Tiempo Entre Costuras” (The Seamstress) in the lists of favorites in both China and Taiwan. A few months ago this was published in China with astounding success, selling more than a hundred thousand copies in the 1st month. While inTaiwan the title published in September by the same publishing house (Thinkingdom Media) has already reached the bestseller lists. Links: Enlaces: