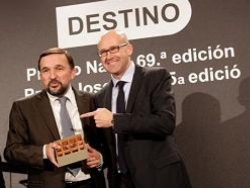 The Nadal Novel Award is a literary award for the best in-edit work selected by the publishing house, Ediciones Destino (a sub-label of the Grupo Planeta). Its notoriety is established as the oldest literary award granted in Spain and in the category of the writers who have been acknowledged with this prestige are important Spanish literary figures from the 20th century. This year the winner of the 69th edition of the Nadal Awards is the journalist and writer Sergio Vila-Sanjuán for his novel Estaba en el aire, (It was in the air), which will be published by Ediciones Destino on the 12th of February. The novel takes place in Barcelona at the beginning of the 60’s when the “consumer society” was born, it narrates the story of four characters who converge in a clenching ending. It’s true, that his first novel; Una heredera de Barcelona (2010), (An heiress of Barcelona), also passes in Barcelona, in the 20’s and part of the narrations are of his grandfather. Estaba en el aire, describes Barcelona at the beginning of the 60’s and is inspired by memories of his father and of his childhood. “I come from a family of three generations of journalists, but they didn’t write about their lives only about the lives of others. Mi first novel narrates a moment of my grandfather’s career and of my father. I believe that, one day, I’ll end up writing about myself, but first I preferred to pass through my family tree .” (El Pais, 8, January 2013).