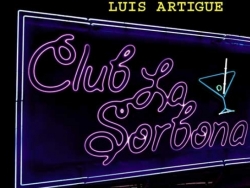 0
Interview with Luis Artigueauthor of The Sorbonne Club

The Sorbonne Club is a essentially humoristic novel. In times of crisis are you looking for an escape through humor?

We have to be careful with humor that, in some way, it’s always included in whatever we do, whether we are in times of crisis or calm, it’s the medicine that synthesizes our bodies with the will to keep fighting, to live and to add life to life. However there is no doubt that in times of crisis humor is conductive for challenges and for a desire to Excel. This is why I, aware that I owed my birth place a novel, and also that, as was written by Valle-Inclán, in literature the most difficult writing tasks are humor and lyrical poetry. So I gave myself the challenge to write a novel that had a lot of humor, some poetry, a smidgen autobiographical and with a high level of invention.

What literary or cultural references were the most important during the concept of the novel?

The Sorbonne Club proposes something impossible: find the least common multiple denominator between the schemes of Agatha Christies enigmatic novels, the magnetic humor of John Kennedy Toole and Eduardo Mendoza, the rooted and timeless worlds of Miguel Torga and Antonio Pereira, the realism mixed with fantastic impregnations of Julio Cortázar and José María Merino and the dramatic poetry of Valle-Inclán… Yes, this novel proposes to fail marvelously.

The alternate Globetrotters, the psychology, alternative medicine, pedagogy, the theater, a dectivesque investigation and Mozart… How does one relate and combine all of these elements at once?

Linda Hutcheon, the prestigious literary theorist and professor at the University of Toronto, in her novel Post-modernist Poetry, defined as one of the primary characteristics of postmodern fiction being parody and pastiche structure (both of which are very useful while describing the world today). In fact we are living in dizzying times where reality seems to be substituted for the present and these type of times aren’t derived from decantation only form accumulation. This is why, in my opinion, the novel of today, like life today, shouldn’t present a theme but rather arguably attend to this diversity and multiplicity that conforms our identity and our day to day…. In this case the mortar that relates and combines these themes is humor, understood as a refined invitation to prudent drunkenness… Or maybe not so prudent.

The novel creates a very particular world that you are very familiar with. How much of this was based on real events?

I was born and raised with peaceful idealism in the frame that this novel occurs however, I have represented it as I see it reflected in the mirrors of a grotesque alley… It’s like taking the basic nature of someone and distorting it and augmenting it. It’s like dissimulating auto fiction.

In The Sorbonne Club many different kinds of characters appear and disappear, do you have any special memories of a concrete character?

The teacher Mrs. Enriqueta- a homage of sorts to rural teachers from the Free Institution of Education- she is one of my favorite characters from this book, followed very closely by a studded soul healer and named Arnau. In both, along with a moving interest for the others and for the other, there is an aspect that interests me very much: they have created an austerity that is terribly seductive.

The story uses a very elaborate language mixing the cultured with popular, was it complicated to write and mix these different registers?

This mixture represented, overall, in the confrontation between victorianism and the English detective Mr. Tatel with the prostates and the rude locals, I believe that they don’t manifestate so much in the narrative in itself as much as in the dialogues. It’s possible that a writer is in essence a listener of voices. The contrasts in the voices of this novel are funny because most of them come from listening or that haven’t lost their freshness. In fact, observing the dedectuve and wandering investigator, Mr. Tatel, night after night and in brothel after brothel, the reader can discover that so called English humor but in reality, the English don’t have a sense of humor: it’s just the way they are and we find it funny.

Will you “revisit” the universo of Violincia in the future?

I hope so! But whatever happens what I really want is to always be engaged in a creative fight with a certain amount of dementia.