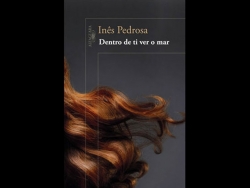 0
Dentro de ti ver o mar (I can See de Sea inside You), by Inês Pedrosa

Inês Pedrosa (Portugal, 1962) is a television and radio journalist, a columnist for both the Portuguese weekly paper Sol and for the magazine Ler and is the director of the Casa Fernando Pessoa in Lisbon, she is also one of the most recognized contemporary Portuguese authors.

In 2010 she was the winner of the “Prémio Máximo de Literatura” with her novel; Os Íntimos. Her books have been published in Brazil, Italy, Spain and Germany.

Her latest novel, Dentro de ti ver o mar (Dom Quixote, Portugal, 2012), was recently published in Brazil by Alfaguara Editorial. I see the Sea inside You is a bold and original novel written in several layers that tangle together to tell the story of three independent women and the two men that accompany them.

“A novel that deserves to be read. Its endowed with qualities of form and depth that characterize it as the best novel by this author.” Miguel Real, JL – Journal; Letras, Artes e Ideias