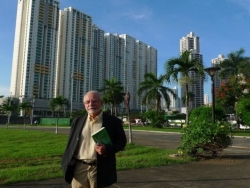 José María Merino is a member of the Real Academia Española  (Spanish Royal Academy) and has received various awards for his works that include, narrative, young adult literature, short stories, essays and poems.

His first novel, The Novel by Andrés Choz, (La Novela de Andrés Choz)  published in 1976, won the Novel and Short Story Award. In 1985 he was distinguished with the Critics Awards for his novel; The Dark Shore, (La orilla oscura). In 1993 he was given the National Young Adult and Children’s Literature Award for; I’m Not a Book, (No soy un libro). The novel Lucrecia’s Visions, (Las visiones de Lucrecia) (1996) received the Miguel Delibes Narrative award. In 2004, the novel The Heir, (El heredero) won the Ramón Gómez de la Serna Award and The Place without Guilt, (El lugar sin culpa), won the Torrente Ballester Award. The River of Eden; (El río del edén) has also won the critic Award of Castilla and León.

The jury highlighted The River of Eden as: “a book in which the author has adopted a second auto-reflexive voice in order to bring life to a familiar micro-cosmos, that revolves around a boy with a disability and the crisis that his appearance provokes on family life. It is a technically risky work that has been well resolved, and that gains tension as the story advances and its crucial problems, like the right to a dignified death, find themselves perfectly exposed.”