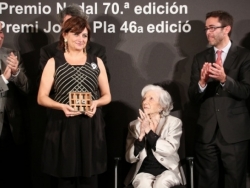 In its 70th edition, the journalist and writer Carmen Amoraga (Picanya, Valencia, 1969) received the Nadal Prize for La vida era eso, an "intimistic" novel that deals with love, loss and social networks, "the value of what we have lived and what is yet to be lived", and that was presented, as usual, under a pen-name, and with the title Senza fine. The novel's main character, Giuliana, loses her husband and has to take care of her two children. She unexpectedly finds relief in the friends her husband had in the social networks he liked. The jury has highlighted the way that Amoraga uses "with a fine ear contemporary language", the work's modernity in dealing with "new ways of communicating and relating to other people via social networks" and how it achieves a difficult goal: using humor to deal with loss. The author, which was finalist of the Nadal in 2007 with her novel Algo tan parecido al amor, and has received other awards such as the Ateneo Joven de Sevilla or the Valencian Literary Critiques Award, was thrilled to receive the award from Ana María Matute, saying she had never imagined it. Amoraga dedicated the award to her "high school literature teacher, and to all the teacherS that are living through these hard times", and wore a badge to protest for the closing of Canal 9, in which she worked in the past. La vida era eso will appear soon in Destino.