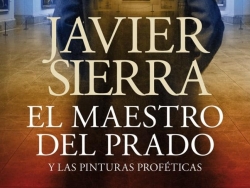 0
"El maestro del Prado" ("The Master of El Prado"), by Javier Sierra, the most sold national novel in Spain in 2013

El maestro del Prado (The Master of El Prado), sixth and last novel by Javier Sierra, was the most sold among the national fiction books in Spain in 2013, as revealed by Nielsen Bookscan. Published in February 2013 by Planeta, it has sold more than 150.000 copies in Spain and the same amount in Latin America, reaching its seventh edition and remaining on the best seller lists for more than 25 weeks in the sales lists. The novel, a mixture of art, history, suspense and conspiracies, crosses the limits between reality and fiction by placing Javier Sierra in the center of a mysterious tour around the Prado in which he is accompanied by an enigmatic master, who will show the author the secrets hidden in paintings by artists such as Raphael, Tiziano, El Bosco, Juan de Juanes, Botticelli, Brueghel or El Greco. By the end of 2014, El maestro del Prado (which has revived the attraction of the public for the museum, and aspires to become a book of reference for all those interested in it) will be published in English, Portuguese, Russian and Hungarian.