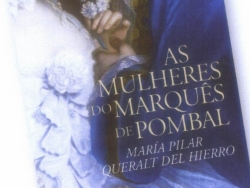 María Pilar Queralt is still investigating about the most important female characters in history; As Mulheres do Marquês de Pombal has been recently published in Portuguese by A Esfera dos Livros. The work deals with the decisive role of a group of women in the life of the Portuguese statesman Sebastião José de Carvalho e Melo: his mother, Maria Teresa Luiza de Mendonça e Melo, his first wife (the widow Teresa de Mendonça e Almada, ten years older than him, which he kidnapped and married in secret), his second one (Maria Leonor Ernestina Dau) or some other women that acted as protectors (Maria Ana de Austria) or enemies (la Marquesa de Távora, D. Leonor). The book will be presented on the 10th of March in Salão Nobre do Palácio do Marquês de Pombal in Largo Marqués de Pombal, Oeiras (Portugal), in an act that will count with the presence of the author and of the city councilor of Culture of Oeiras, doctor Marlene Rodrigues.