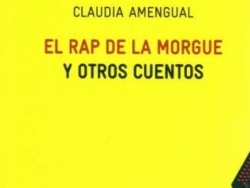 The Uruguayan writer, translator and journalist Claudia Amengual has recently published El rap de la morgue y otros cuentos (The Rap of the Morgue and Other Stories). The book, the first collection of short stories she publishes after having written novels, biographies and journalistic pieces, appeared in the United States in La Pereza Ediciones, and gathers texts written between 2001 and 2012. Tense and threatening, filled with lonely and defeated characters, death runs through all the stories, as well as the consequences of the crisis that hit Uruguay at the beginning of the century. In an interview published in El Nuevo Herald, Amengual covers all these topics, comments on the book and how it fits among her other titles and explains the differences between writing a novel or short fiction.