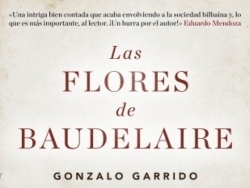 Las flores de Baudelaire (Baudelaire's Flowers), the first novel by Gonzalo Garrido, published in 2012 by Alrevés, was reprinted last month in its paperback edition by DeBolsillo, which is part of Penguin Random House group. This news just goes to prove how Garrido's career is growing. His first novel, a blend of mistery and history that deals with treason and its presence as a guiding force in our lives, became an unexpected success. The novel (now, in its third edition) has appeared repeatedly in the best seller lists, has been finalist of awards such as the Memorial Silverio Cañada (granted by the Semana Negra de Gijón) and has received the praise of brilliant authors such as Eduardo Mendoza. Las flores de Baudelaire is just the first step in a career that we predict as more than solid, and that has a bright future.