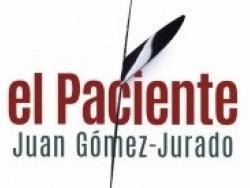 Just three months after its release, Tipping Point (Planeta), the much-anticipated return of Juan Gómez-Jurado after the success of The Legend of the Thief (2012), reaches its third edition. The dilemma of doctor David Evans, forced to choose between the life of his daughter and that of his next patient, who is none other than the president of the United States, has already captivated thousands of readers in Spain and plans to do so abroad too: Tipping Point will be published in Germany by DTV, in the UK by Orion and in the USA and Canada by Atria. And this is just the beginning...