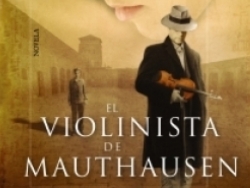 0
Algaida reissues "The Violinist of Mauthausen", the best selling novel amongst those awarded with the Ateneo de Sevilla

The Violinist of Mauthausen, by Andrés Pérez Domínguez, won the XLI Premio Ateneo de Sevilla in 2009 by unanimous; it was praised by unquestionable authors such as the last winner of the National Award in Narrative José María Merino, who welcomed its thematic novelty and literary vocation. Five years later, its well-balanced mixture of History, intrigue, espionage, adventure, lwar and romance, which portrays the Holocaust from the perspective of exiled Spaniards, has turned it into the bestselling novel amongst all those awarded with this prize, with more than 60.000 copies sold and a new edition that has just hit the stores. Such a long running seller that reaches new readers every day and still has a bright future to come.