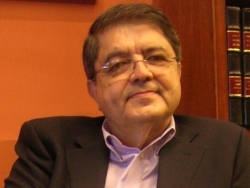 Tuesday November 11th, Sergio Ramírez was awarded the Carlos Fuentes International Prize for Creative Writing given by the National Autonomous University of Mexico (UNAM ) and the National Council for Culture and Arts (CONACULTA).

The members of the jury were Juan Goytisolo, Mario Vargas Llosa (Nobel Prize and also awarded the first edition of this Prize), Soledad Puértolas, Margo Glantz and Gonzalo Celorio, who chose Sergio Ramirez for "Combining a high quality literature with a committed literature and its role as a free and critical intellectual  with a civic high calling ".

He has published over 50 titles in various genres such as novels, short stories, essays, and memoirs. His work has been translated into more than 15 languages ​​and he has been awarded with the Dashiel Hammett Prize in 1990 for Castigo Divino (Divine Punishment), the Laure Bataillon Award in 1998 for the best foreign translated book into French for Un baile de máscaras (A mask dance), the Alfaguara International Prize, 1998, for Margarita está linda la mar (Margarita, How Beautiful the Sea), and the José Donoso Prize granted by the University of Talca, Chile.

It´s an honor for the Antonia Kerrigan Literary Agency to represent this icon of Ibero-American literature.