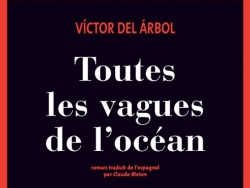 ‘Un millón de gotas’ has been awarded the most prestigious French literary award appointed for the noir genre. Its author, Victor del Árbol, repeats once again the great feat of conquering the most distinguished reviews of the noir genre in France. Previously, in 2012, he was the first Spaniard to obtain the Prix du polar Européen, awarded by the prestigious French publication Le Point.

Le Grand Prix de literature policière, founded in 1948 by the author and literary critic Maurice Bernard Endrèbe, is given annually to the best French novel [and foreign novel]. This year the French winner was “Derrière les panneaux il y a des homes,” by Joseph Incardona. The winners are determined by a jury of up to 10 members, which also includes authors. Each of the judges preselects a combination of works that they bring to discussion, for later making a voting list that they present before the jury. Amongst the acclaimed authors from the last decades that have been worthy of the prize are Jean-Patrick Manchette, Didier Daeninckx, Mary Higgins Clark, Elizabeth George, Thomas Harris, Patricia Highsmith, Arnaldur Indridason, P.D. James, Léo Malet and Manuel Vázquez Montalbán.

As of today, Victor del Àrbol joins a grand line-up of authors with “Un millón de gotas,” in French, “Toutes les vagues de l’océan”, published last February by Actes Sud in France and Destino [in Spain] in May 2014. It’s a novel to which the French media have dedicated entire pages and their best praise.