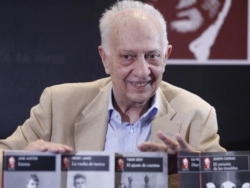 The Mexican writer and essayist Sergio Pitol will be awarded the International Prize Alfonso Reyes 2015, in virtue of his valuable cultural, artistic, and literary contributions, and his extensive experience.

In a statement, the Organizing Committee of the International Prize Alfonso Reyes announced today that Sergio Pitol is the winner of the award this 2015. It also marks that Pitol is a citizen of the world and at the same time a profound expert on Mexican culture.

“He’s the living example of passion for knowledge and implacable criticism, whose unmistakable voice amongst the Hispanic-American narrators is fundamental to the writing, owing to his originality,” declare the organizers.

The prize was created by Francisco Zendejas in 1972. It aims to appreciate the work of the Monterrey-native writer Alfonso Reyes by distinguishing personalities with a vast trajectory in the field of humanities. Amongst the prize-winners are Mario  Vargas Llosa, Eduardo Lizalde, Ignacio Bosque, Fernando del Paso and Ida Vitale (previously).

Pitol was born in Puebla, March 18, 1993. He studied law and letters at the Autonomous University of Mexico (UNAM) and is a member of the National System of Creators of Art, as creator emeritus, since 1994. He has received the Xavier Villaurrutia Award 1981 for “Nocturno de Bujara,” the Herralde Novel Award in 1984 for “El desfile del amor” and the National Literature and Linguistic Award 1993; as well as those of the Latin-American Literature and the Caribbean Juan Rulfo 1999, and the Cervantes of Literature in 2005.

The Organizing Committee is formed by the Secretary of Culture of the Government of the Republic, the Government of the State of Nuevo León through the Council of Culture and Arts, the Alfonsina International Society, the Autonomous Univeristy of Nuevo Leon (UANL), the Monterrey Technological, The University of Monterrey and the University Regiomontana.