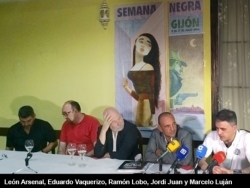 The Argentine Marcelo Luján (Buenos Aires, 1973) has been awarded the Dashiell Hammett, the principal recognition awarded at the Semana Negra de Gijón, for his book Subsuelo (Subsoil), a disturbing and sober thriller that has been considered by the judges as the best book of the noir genre published in Spain in 2015. Luján won the Getafe award in 2009 for “La mala espera”. Visibly emotional, the winner has assured that one of his “childhood dreams has been fulfilled” and that it is a prize “for the risky decisions taken at the beginning of the writing of the novel.”

With this novel, the winner, whether he likes to go towards the margins of the genre or directly disaffiliate from it, shows that he is an excellent anatomist of daily evil. Three adolescents, three siblings, are sitting on the edge of a pool in a summer house. A fourth arrives late and has to go get ice but doesn’t feel like it. He doesn’t know that his contempt will be the beginning of the tragedy. From this nice and apparently anodyne point of departure, Luján unfurls a deep analysis of desire, envy, hatred, filial love and predatory sex and destruction. A book with a simple style, a thriller based on the strength of the characters and which pays tribute in its profundity to the master Patricia Highsmith.

The author of “Moravia” succeeds Carlos Zanón in the list of winners, as well as Alexis Ravelo and Guillermo Saccomanno, the last three to have won it, along with a prestigious group of authors that include Ignacio Taibo II, Andreu Martín, Juan Madrid, and Jorge Reverte.