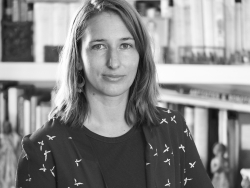 Marta Barrio won XVII Tusquets Novel Editors Award with Small firewood which, according to the unanimous verdict of the jury, is a “startling and surprisingly mature account of the dramatic experience of a young woman and her unexpectedly frustrated motherhood.”
It is, according to the statement released by the publisher, a story that “maintains at all times a difficult balance between pain and the strength of not being carried away by a premature loss”, and considers that the award for Barrio is “confirmation of a new voice with a whole future ahead ”.