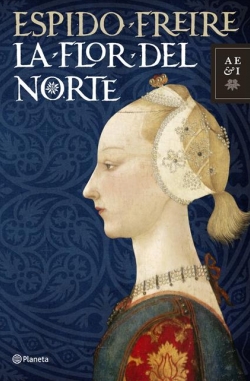 Year: 2011
Editorial: Planeta
Language: Español, Catalán
Synopsis: A story about the mysterious Kristina Haakonardottir, the young Norwegian princess forced to become Princess of Castilla on marrying Don Felipe, brother to Alfonso X, The Wise. Kristina will embark upon a journey from her cold northern country to Castilla, to finally end up in a Seville that is beginning to bloom and which amazes her with its customs, colors and brand new sensations. But all of her discoveries will be impregnated with suffering and agony by the inevitable destiny that her mysterious illness will lead her to. Poor Kristina will die betrayed and loathed far from her home, in the midst of a country that always saw her as the Foreigner.

‘My name is Kristina Haakonardottir, daughter and grand daughter of kings, princess of Norway, Princess of Castilla. I am called The Northern Flower, The Golden Present, The Foreigner, and, in the last couple of months, Poor Doña Cristina.’