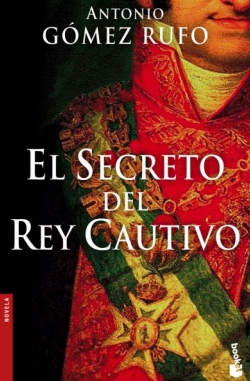 Year: 2005
Editorial: Planeta
Language: Español, Catalán
Synopsis: At the death of Manuela Malasaña, during the tragic events that took place in Madrid on the 2nd of May of 1808, Captain Zamorano is put in charge of carrying a bag to his regiment from Madrid to Extremadura and handing it over to Coronel Díaz Porlier. He is accompanied by Sartenes, a prisoner from the Casa y Corte prison, who has been freed to fight the French, and Teresa, an embroideress friend of Manuela, will soon join them too. The contents of the bag are of the utmost importance for King Ferdinand VII: none other than the codes to discover, recover, guard and return the many riches of his royal heritage.

The Napoleonic invasion forces the protagonists to form a party of guerrilla fighters that, throughout the war of independence, fight the French troops. But another new mission awaits them: recover the treasure of the captive king, hidden in besieged and subjugated Madrid.

There, Master Ezequiel, a group of Jews established in Madrid, and Cayetana, the Marquise of Laguardia, will live, along with the other protagonists, a series of machinations of political intrigue, amorous rivalries and gripping adventures, which will lead them to situations on the edge of human passions.

All of this takes place in the middle of war and in a Madrid governed by an imposed king, Joseph Bonaparte, popularly known as Pepe Botella. A monarch who wanted to be a good king but which circumstances turned into a blameless villain.

The end of the War of Independence, in March of 1814, with the expulsion of the French from Spain and the return of Ferdinand VII, seem to put an end to the adventures of Captain Zamorano and his band. But the abolition of the Constitution born on the Cortes de Cadiz (Courts of Cadiz) in 1812, the abolition of the liberal regime and the establishment of dictatorship by foolish Ferdinand VII, forces the protagonists to rebel anew to recover their lost liberties.

“The Secret of the Captive King” is, in short, a novel of adventure, intrigue and love that takes place at the beginning of nineteen century Spain. The recovery of an episode little remembered in the history of Spain, embodied through the vicissitudes of characters that project the true dimension of seminal events of our country’s past.

“The Secret of the Captive King” brings together the necessary requisites to reach a certain commercial success: it’s a prize-novel, it joins the fashion of historical narration—its action takes place in the middle of the War of Independence, during the occupation of Spain by Napoleonic troops—and unfolds according to the model of an adventure novel with all its characteristics, such as shift in local, changing scenery, the exalting of feelings and passions—friendship, patriotism, jealousy, etc.—, the risky and dangerous deeds or the conversion of characters into exemplary heroes.”