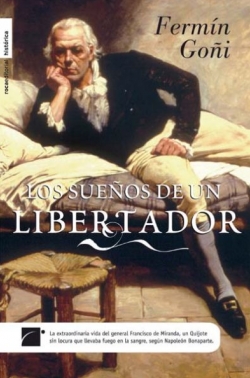 Without Francisco of Miranda there would have not been a Bolivarian Revolution.

This Spanish military, born in Caracas, had placed all his intelligence to the service of the crown of Carlos III and in doing so won battles without firing a shotgun. But disappointed with the ineptitude, envy and maliciousness of viceroys and generals, he decided to put the Spanish colonies overseas behind him. He traveled throughout the United States and Europe; met George Washington and Napoleon; befriended Catherine the Great of Russia and captivated generals, intellectuals and leaders. Having knocked on all the doors of the great rulers of his time, he finally managed to get support to undertake his life’s cause: the maritime invasion of the Spanish domains in the Caribbean, starting by his native Caracas, to create Grand Colombia, the dream of a United States of the South.

This novel reads with the strength that stems from authentic stories, those which only need to be channeled with a steady hand, as Fermín Goñi, manages full well, because the life he narrates is so fascinating and epic that the best literary ornament is to retell it just as it occurred.