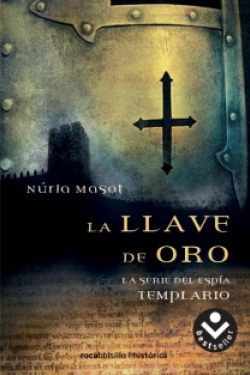 Year: 2006
Editorial: Roca Editorial
Language: Español, Catalán
Published at: Mondadori (Italy), Diana Verlag (Germany), Muza (Poland), Gabo Kiado (Hungary).
Synopsis: Nuria Masot strikes back with the third book of her quartet of historical and mystery novels devoted to Templar Knights. Before La llave de oro, the two previous novels of the series, La sombra del Templario and El laberinto de la serpiente, have sold very well in Spanish as well as in the other languages to which they have been translated (Italian, German, Polish or Portuguese, amongst others). In this book we find Guillem de Montclar, the Templar spy, and his fellow knights in the year 1272, following the tracks of and old and intriguing book, La llave de oro (The Golden Key), which is one of the few sacred texts of the Cathars that they managed to hide and keep safe from Inquisition. ¿What mysteries can this book reveal to those who read it? All the novels of the quartet are written in a hooking and gripping style, which reminds us of the classics of the adventure genre.

‘Masot goes further than the simple historical novel: she helps us understanding the times in which we live” Javier Sierra, author of La cena secreta (The Secret Supper)