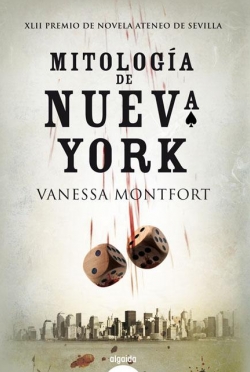 “I ask only one chance. This is a gamble on just one hand. If I win, if I can convince you in time, you won’t read a particular page from this book. But let me play out my cards according to my own rules.” So begins his story Daniel Rogers, a player infiltrated by the police into the world of illegal gambling in order to investigate the brutal murders committed by the ‘Sons of Chance’, a bloodthirsty organisation that gambles on the lives of its victims in cards games. Events turn when Laura crosses his path. She is an unsuccessful painter recently arrived to the city from some corner of Europe with the dream of living the great adventure that can change her life forever. A strange attraction is born when they discover that their fates are linked by the Mythology of New York, a novel compiling murders that now seem to be happening in the real world. Through this mysterious book, a breakneck race begins full of hidden messages, twists and revelations on the way to uncovering the identity of murderers. A dangerous game where the line between fiction and reality threaten to burst forever. Desire, gambling, lies, fantasy and madness converge in a mythical city where every street is the backdrop to a novel or film from any time in history, inhabited by unforgettable characters, villains descended from the pages of Marvel comics, cinema and literature.