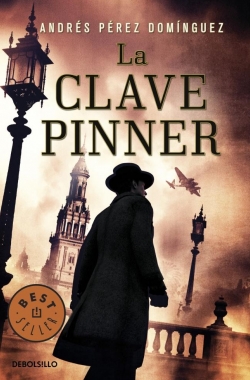 Year: 2004
Editorial: Roca Editorial
Language: Español, Catalán
Synopsis: Spring of 1943. On the eve of the allied landing on the Mediterranean, the British Secret Service has put in place operation “Mincemeat” to fool the Germans: they will abandon before the coast of Huelva (Spain) the dead body of a fake pilot of the RAF, who carries documents which give clues to the forthcoming landing as taking place somewhere in the Eastern Mediterranean or in the South France.

A few days later, Gordon Pinner, an ex agent to the NKVD, is blackmailed in London by two agents from M16 so that he travel to Seville to track down Miguel Carmona, an old friend whom he thought dead and who could have in his possession, perhaps unbeknownst to him, the clue that will decide the outcome of the Second World War. Although he had sworn never to set foot in Spain, as long as Franco was still in power, Pinner agrees to travel to Seville, but for a different reason from that which he has been recruited…

Andés Pérez Domínguez, through characters that have been molded with unusual depth, takes us through the well-guarded coasts of Huelva, to the London nights, all the way through Prague in the 30s—meeting point for arms dealers during the Spanish Civil War—and from there to Gibraltar, the last strong-hold of the Allies in Continental Europe; and finally, to Seville, where, the tension intensifies from chapter to chapter, and we are driven, with unquestionable skill , towards an unexpected end.