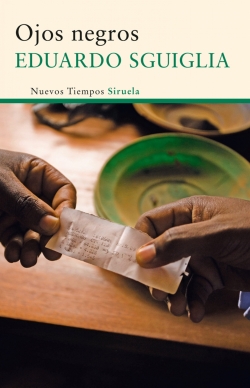 Year: 2010
Editorial: Edhasa
Language: Español, Catalán
Synopsis: In early 2002, Miguel, an unemployed Argentinean, is at the brink of financial ruin, and worse yet, with a feeling of having a life not worth living. His distress only seems to grow when he accepts to travel to Africa to carry out an almost impossible mission. A blind bet of sorts, all or nothing, where the “all” is wealth and the end of depravation and the “nothing” death.

Congo and Angola are the physical landscapes where this wager will unfold; the diamonds are the saving trophy, or perhaps his guillotine. Finding his path step by step, many a time ignoring what is expected of him, Miguel becomes part of a web of precious stone traffickers. Beyond this world of excessive riches and automatic treachery, are the supporters of a civil war, the sudden eruption of violence, and a Mexican policeman who joins by chance the plot and accelerates it. And also beyond, like a fragile dream that denies being part of the nightmare that enfolds it, is love, an unexpected woman who impels Miguel to forget about the wager and promises the happiness he could have never foreseen.

Black Eyes is, in short, a hypnotic novel, that narrates the vicissitudes of a character who discovers, always somewhat late, the decision that must be taken. In this delay, his life waivers, and, like in those distractions that save one from an accident instead of triggering it, emerges the path that can make him forget the initial reason for his trip, the anguish that cast him out of Argentina and that ambition that exalts and destroys him. Without pauses or concessions, Eduadro Sguiglia takes the reader by the hand on a hallucinating trip, and as it could be no other way, one which unravels with a startling end, where literature and adventure make their peaces.