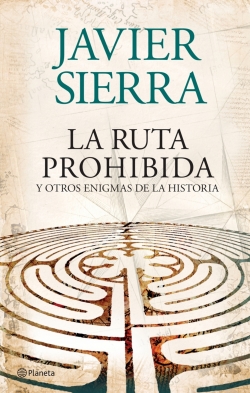 Year: 2007
Editorial: Planeta
Language: Español, Catalán
Synopsis: The book that explains and describes not only the origin and the sources behind the mysteries of Javier Sierra’s novels, but many more historical enigmas that he has been finding in his years as investigator.

Since the 1980s Javier Sierra has visited more than twenty countries, probing their mysteries. Egypt is the country he is most familiar with, having travelled there numerous times to investigate unsolved enigmas about the Pyramids. What pushed Napoleon to spend a whole night alone inside the Great Pyramid in 1799? What happened to him there?

In a trip to Israel, Javier Sierra found out that one of the most precious (and missing) Jewish relics, the Menorah, may be hidden somewhere in the Vatican.

What can explain that in less than two centuries, and only in France, 2.136 romanic abbeys and 96 Cathedrals were built? What is the meaning of the Labyrinth of the French Cathedral of Chartres (13th Century)? Why were the Nazis so interested in the relics the Templar Knights jealously kept, some centuries before Hitler, in their Southern France fortress?

During his research in Turkey, Javier Sierra sought—and found—the controversial map of Piri Reis, a document offering definitive proof that Christopher Columbus arrived in America thanks to previous navigational charts made prior to 1492, which already reflected the New World in their routes. What brave sailors reached America before Columbus? How did they manage it?

In almost 300 thrilling pages, accompanied by pictures, Javier Sierra invites us to join him on a route that will unveil some of the biggest historical enigmas of all times: The Forbidden Route.