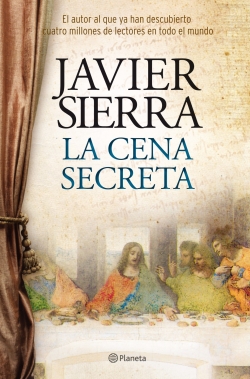 Year: 2011
Editorial: Planeta
Language: Español, Catalán
ISBN: 9788408107811
Format: Hardcover
Pages: 368
Synopsis: January of 1497. Agustín Leyre, a member of the Inquisition and an expert in the interpretation of encrypted messages, is sent from Rome to Milan to supervise the work of the ‘maestro’ Da Vinci, who is about to finish his masterpiece ‘El Cenacolo’ (The Last Supper).

Leyre travels to Milan because of a series of letters that have been sent to the Vatican by an anonymous writer, who denounces that Da Vinci isn’t respecting the rules and codes of sacred art as, amongst other things, he has painted himself giving his back to Jesus.

Why did he do this? Was Leonardo Da Vinci, by any chance, a heretic?

El Cenacolo is a rather unconventional painting as it doesn’t show the Holy Grial, neither Jesus giving the mass. The models Leonardo used for the disciples are mainly heterodox characters of the time, monks of the convent of Santa Maria delle Grazie (where the painting can still be seen), and even Plato, the philosopher. As the novel progresses we’ll learn that the work keeps a surprising secret, which is only revealed once we learn to ‘read’ the painting. But the path towards learning what's behind the maestro's art is also full of mystery, intrigue and murder.