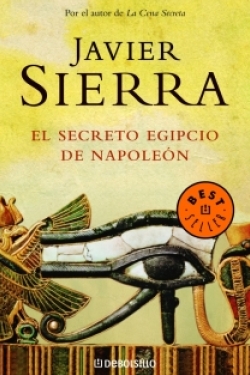 Year: 2002
Editorial: De Bolsillo
Language: Español, Catalán
Synopsis: During the summer of 1798, more than thirty thousand French soldiers disembarked in Egypt commanded by the General Napoleon Bonaparte. His official mission was the liberation of the country of Nile from three centuries of Turkish domain and also to block the unrestricted navigation of the British fleet and it's Oriental colonies. No one but the young Napoleon had ever brought scientists to Egypt to study, write and copy all they can from this marvellous country. Temples, graves, mummies, tunnels, large and grand treasures, and pyramids opened to them unveiling a new world, very ancient at the same time.

NAPOLEON ARRIVED IN THE RIGHT MOMENT. Certain Islamic sects, and the heads of the Coptic Church, were waiting for a leader - half warrior, half mystic, capable of returning them to their splendorous past. Although, Napoleon seemed to chase another purpose beyond political or religious: he was obsessed with searching for immortality to be found in Egypt: the formula that will guarantee eternal life.

Without proof, Napoleon believed that Jesus of Nazareth had obtained, in his Egyptian

exile ( depicted by the gospels ) - the same formula. Jesus resurrected Lazarus and returned from the dead, following a ritual that---according to the pharaoh's beliefs--was successfully applied by gods and goddess such as Isis and Osiris.

NAPOLEON'S EGYPTIAN SECRET exposed an intrigue of colossal proportions. Ancient Christians, Nomads, Muslims and descendants of the builders of the pyramids, have been confronting each other to get the formula of life. If it was not for the secret so mighty that the pharaons gave to Jesus of Nazareth, what else was Napoleon Bonaparte looking for during his year of campaigns in Egypt, Syria and Palestine?

The involving plot created by Javier Sierra in the pages of his trepidant historic novel will bring you to see an episode from history with different eyes.