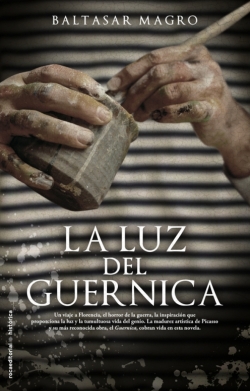 Year: 2012
Editorial: Roca Editorial
Language: Español, Catalán
Synopsis: A journey through the life and work of the Spanish painter and a sincere homage to the masterpiece that has best captured the tragedy of the Spanish Civil War. Pablo Ruiz Picasso travels to Florence from Paris, the city were he resides. It is in that city that he first sees a painting by Rubens, The Disasters of War, which will cause a lasting impression and which will be the source of his most famous work: Guernica.

Back in Paris, the Civil War breaks out and, on the 27 of April of 1937, Jaime Sabartés, Picasso's loyal secretary shows him the newspaper covers of the Guernica bombing. This is impacting and appalling piece of news, the horror by the well-planned general massacre, profoundly disturbs Picasso and his friends. The Spanish Ambassador takes advantage of the up-coming International Exposition to ask Picasso for a mural and, although the deadline is quite tight, the painter accepts the commission. In “The Light of Guernica”, Magro has recreated in great detail and with profound admiration one of the most important paintings of all times and, certainly, the best graphic expression of a terrible massacre.