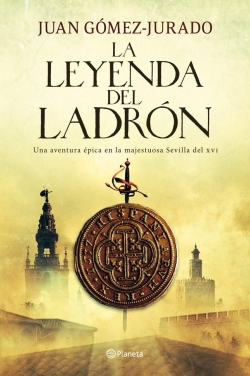 Year: 2012
Editorial: Planeta
Language: Español, Catalán
Published at: Argo (Czech Republic), Pegasus Yayincilik (Turkey), Sonia Draga (Poland), Laguna (Serbia).
Synopsis: In the year 1587, Seville was the most important city in the world. With a hundred and fifty thousand hungry mouths to feed and the plague, which had already decimated thousands of lives, this was the perfect breeding ground for the picaresque to flourish. The underworld, wheeling and dealing, corruption, beggars and prostitutes, noblemen and merchants, swordsmen and thieves—all lived behind the city's famous walls.

In those days, a party of soldiers led by the King's commissioner for supplies, a so-called Miguel de Cervantes, will reach a country inn in the city of Écija. Carried away by compassion, Miguel will rescue a child from the plague, who later becomes a key figure in his life: Sancho de Écija. At death's door, the child clutched his mother's dead hand, whom he had cared for till the end. Struck by the kid's bravery, Miguel risk's his neck and decides to take him to an orphanage in Seville for his care and education.

Sancho was ungraceful, tall and with green penetrating eyes. But he stood out for his talent, non-conformity and inner strength. A 13-year-old genius whom no-one had given a chance. However, his strong personality and lack of social skills—besides the fights he gets into to defend the meekest—result in his not obtaining his dream-job, as assistant accountant at the home of a banker.

As punishment for his rebelliousness, he is sent to work under the orders of a cruel innkeeper who abuses him non-stop. Nevertheless, Sancho's life will change abruptly on the day a strange English gentleman, vagabond, actor and poet by the name of William Shakespeare gets him into trouble with the innkeeper, which results in his receiving such a beating that he is bedridden for three days. During this time, William keeps him company by telling him stories which will change his conception of the world and of himself.

Thus, the novel delves into the life of young Sancho. An adventurer who longs to take to sea for the New World. To embark upon a ship and plow the oceans far from that infested and dangerous city of misers and thieves. But he was only a kid and life, till then, was turning out to be the total opposite. Back then, the world seemed to be in constant turmoil as a consequence of the war with England. The Anglo-Spanish War of 1585-1604, the Spanish Armada period and the tumultuous times in which the Spanish Monarch, Felipe II, had come up with the enterprise to dethrone Queen Elisabeth I of England. 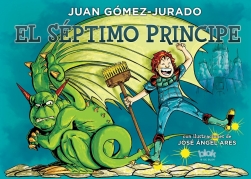