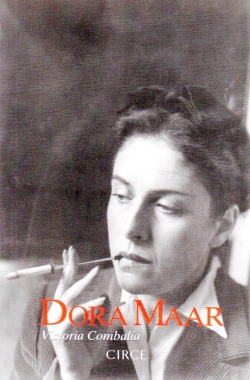 Year: 2013
Editorial: Circe
Literary Category: essays
Language: Español, Catalán
ISBN: 9788477652922
Format: Paperback with flaps
Published at: España
Synopsis: Dora Maar died in 1997 leaving behind an aura of mystery and expectation. She was Picasso’s lover between 1936 and 1943, she had photographed the Guernica and was an exceptional model for the series; The Crying Woman by the painter from Malaga. Dora Maar’s father was Yugoslav and her mother French although her childhood was spent in Argentina. Rejecting her bourgeois origins she became a political left wing activist joining the group Contre-Attaque and was the lover of the philosopher and revolutionary Georges Bataille. Member of the surrealists, Paul Éluard introduced her to Picasso. In a famous scene in the Café Les Deux Magots, Dora seduced the artist. With Picasso she had a tumultous life though little creative activity. Becoming the muse of Picasso, portrayed a thousand times in her abundant beauty but more so as a mask of suffering and torment. Abandoned by the artist, she found refuge in religion and in painting, living as a recluse in her between apartment in Paris and her house in Ménerbes, in the south of France. The author of this biography had the rare privilege of extensively interviewing Dora Marr in 1993 and of organizing the first retrospect exhibition of her photographic and pictorial work in 1995. She was also granted access to the family archives with which she was able to reconstruct, over several years of investigation, the multiple lives of this fascinating and secretive woman.