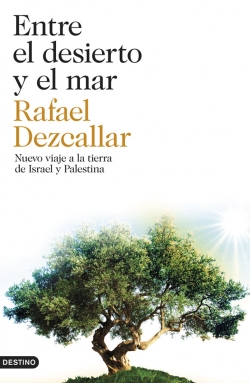 Year: 2013
Editorial: Destino
Literary Category: travel literature
Language: Español, Catalán
ISBN: 9788423347445
Format: Paperback with flaps
Pages: 380
Published at: España
Synopsis: Between the Arabian Desert and the Mediterranean Sea there exists a land that since antiquity has polarized the visions and dreams of humankind. Some maintain that God gave it to their people; others that God was born there; and yet others that their prophet chose it to climb to heaven from there. All three main monotheistic religions claim it as theirs. They’ve all wanted to beautify it and honor it, and all have shed a lot of blood for their cause.

This land is nowadays called Israel and Palestine, and it still makes to headlines news. What does this land have that since millennia it has produced ecstasies, war, love, the most heroic acts and also the vilest? Why does everything seem to concentrate here, in this fertile stretch of land, situated between the desert and the sea?

This book is an attempt to narrow in on all these questions, to its complex history and its fascinating reality through six distinctive journeys. Three take place in three cities: Jaffa, Tel Aviv and Jerusalem, the latter the epicenter of everything that has taken place there. The others are devoted to the monasteries of Judea’s desert, to green Galilea, and the borders of Israel, which are crisscrossed from one end to the other in the book’s last chapter.