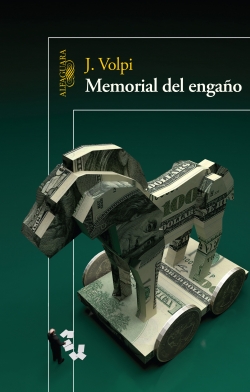 Year: 2014
Editorial: Alfaguara
Literary Category: contemporary fiction
Language: Español, Catalán
ISBN: 9786071130556
Pages: 427
Published at: Sonia Draga (Poland), Seuil (France), Mondadori (Italy), Al-kamel (World Arabic)
Synopsis: On the 17th of September of 2008, two days before the announcement of Lehman Brothers’ bankruptcy, J. Volpi, one of the most respected financial geniuses and a New York patron of the arts, stormed out of his offices of JV Capital Management. That very same day he was indicted by the authorities of embezzling 15 million dollars, a figure which is considerably less than the 65 million that Bernard Madoff had syphoned off, but high enough for him to be considered as another one of great financial criminals of our times. After a harsh trial, in 2013, “Memorial of Deceit” was published in the United States, the alleged biography sent by J. Volpi to a New York literary agent. With a tone that reveals the same cynicism of the “Maters of the Universe” who made fortunes during the housing boom, “Memorial of Deceit” is the story told in the first person of how a group of financial experts, investors, regulators, politicians –and several Nobel Laureates– orchestrated one of the greatest economic catastrophes of all times. Unlike other confessions that appeared in the height of the crisis, “Memorial of Deceit” is a powerful family story that takes on the hues of detective fiction. Along with his own lies, J. Volpi unveils those of his father, an employee at the Treasury who during the Second World War worked as an assistant to Harry Dexter White, the architect of the IMF and World Bank. At the end of the war, both men were accused of belonging to the same ring of communist spies. From one deceit to another, this singular book takes us from the secrets of Wall Street’s bedchambers to the group of Soviet agents who concocted modern capitalism, in a chilling catalogue of duplicities that dwell in the heart of human beings.